“You could now listen in 100% completely undetected” — that’s the promise one company makes on its website to anyone who wants to eavesdrop on someone else’s cellphone. 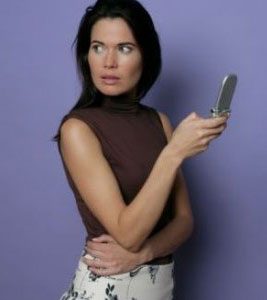 Spy technology is now available to the average person who wants to glean cell phone information, read private emails, and track someone’s location using global positioning systems. And increasingly, experts say, the technologies are being used by spouses and partners to track, harass and stalk. “Technology has just exploded. It’s so sophisticated now and it’s very easy to utilize these different technologies to keep tabs on a person and find out where they’re going,” said Gina Pfund, chief assistant prosecutor of the Domestic Violence Unit in Passaic County.

The person watching or listening is often a family member and frequently a suspicious or controlling partner. They have scanned Facebook pages, viewed online web-browsing histories, and examined cellphone records for proof. But some take it a step further, planting spyware on smart phones and computers.

Easy-to-use spyware is heavily marketed online to find out if a spouse is cheating. It can be installed on computers to monitor keystrokes, emails and passwords and to take screen snapshots.

And within minutes, software can be loaded on a smart phone to allow a third party to monitor calls, view text messages and photos, and track a person’s location and movement via GPS. The built in microphone can also be activated remotely to use as a listening device, even when a phone is turned off. And the phone user will have no idea that he or she is being spied on, say technology experts.

For people who fear a partner is cheating, technology may be used as a way to put that suspicion to rest or to gain proof. Richard Drobnick, director of the Teaneck based Mars & Venus Counseling Center, said some forms of prying can be justified because “people need to know the
truth.”

“Try to talk about it, but if you still have very strong doubts and you find one of these other methods, I don’t think there’s anything wrong with that,” Drobnick said.

He added: “It’s a very sad case if it gets to the point where you need to do something like that, but let’s face it: In the real world, it happens.”

For spouses who are able to glean information and prove a husband or wife is cheating, divorce lawyers caution that the information is useless in court. Adultery can be grounds for divorce, but it means nothing when divvying up assets, unless the spouse can prove family money was spent on the other woman or man. It also has no relevance in child custody decisions.

Jeffrey Bloom, a divorce lawyer with offices in Ridgefield and West New York, cautions people about disclosing that kind of information in court. The inclusion of details about affairs can affect the whole family, even young children who may want to read divorce papers when they are older. “I tell them to try to look at what’s the bigger picture,” Bloom said.

But proof of cheating isn’t the only motive for people to investigate a spouse or partner. Some people may be driven by deep-seated fears of abandonment or a need to control, said Mitchell Milch, a psychotherapist and marriage counselor in Ridgewood.

Technology, he said, can serve as a tool to feed those needs and fears.

“It also contributes to a lot of problems because it can become somewhat addictive and boundaries get violated more easily,” he said.

Increasingly, spy technology like GPS tracking and cellphone interception is being used like a weapon by perpetrators in abusive relationships, say domestic violence counselors.

One Bergen County woman, interviewed on the condition of anonymity, said she was the victim of harassment, hacking and cyber spying following a separation from her husband.

He hacked into her cellphone and erased her voicemail messages, she said. He used a program that made it appear as though he was calling from the phone of someone she knew. He emailed “stealth messages” that would self destruct after opening. On one occasion, he got angry over something she had written in a private email, and she wondered how he could have known.

“He did stuff I didn’t even know you could do,” the woman said.

He harassed her despite restraining orders, she said, and it was even more terrifying because it was nearly impossible to prove. “This was his way of still trying to screw me and still not get in trouble for it,” she said.

Patricia Hart, a victim’s advocate who runs workshops on technology and violence for police departments and shelters in New Jersey, said most people don’t realize how technology can be used to harm them.

Technology “has provided for perpetrators an enormous tool to be able to stalk, terrorize and harass,” she said. “Your lifeline, which may be your cellphone, can so easily be compromised.”

She advises victims to change cellphone carriers if they have a family plan, because some phone companies will reveal a phone location and phone passwords to family members without the knowledge of the user. She also cautions them to closely guard their phone passwords.

Lil Corcoran, associate executive director of Shelter Our Sisters in Hackensack, recalled one situation where a woman was contacted by an ex-partner and had her own words — recorded in another conversation without her knowledge — played back to her. She cautions people to ue throwaway phones and “safe” computers that can’t be tracked by an abuser.

“Even when they are reaching out to us for help, we tell them make sure you use a safe computer,” Corcoran said. “We tell them to go to the library.”

Even with those protections, there is still a wealth of personal information available online, such as Facebook updates that might let a stalker know what party or work event a person is at, experts said.

“All of us live in a world where everything is accessible,” Hart said. “For some people it can be extremely frightening.”

The stories recounted by domestic violence victims are a reminder that 21st-century conveniences like smart phones and Wi-Fi come at a very real cost — the loss of privacy. Ordinary citizens transmit private data on computer and phone lines that can be tapped by retail companies, law enforcement and prying eyes.

“Any time you have technological advancements, you also have the downside that comes along with it as far as privacy is concerned,” said Kevin Murray, a consultant on eavesdropping detection and counterespionage services, based in Oldwick.

Murray, who advises business and government, said people who are concerned about privacy or who transmit sensitive information should know that smart phones are vulnerable. Someone with access to a smart phone can load spyware on it within minutes.

He urges wary individuals to restrict access to their phones by using a strong and unique password and by always keeping their phone in sight. Another form of protection, he said, is to use an old-fashioned phone without Internet capabilities. Phone companies, he said, aren’t likely to improve security because it’s not in their financial interest, since they make money from transmissions.

Many of the companies that sell spyware are based outside the country, making them tough to prosecute, Murray said.

The company that runs cellspynow. com — which promised “100% completely undetected” spying — lists a Franklin Lakes post office box number and cites locations in New York and in England on its website. But the company had no listed number other than a customer service line, where calls went unreturned. The Better Business Bureau also could not reach the company to follow up on 17 customer complaints over three years.

There are legal protections for victims of spying, such as New Jersey’s wiretap statute, which makes it illegal to intercept electronic or oral communication. The Bergen County woman who was harassed and spied upon said she hoped law enforcement would go further and take the technology off the market.