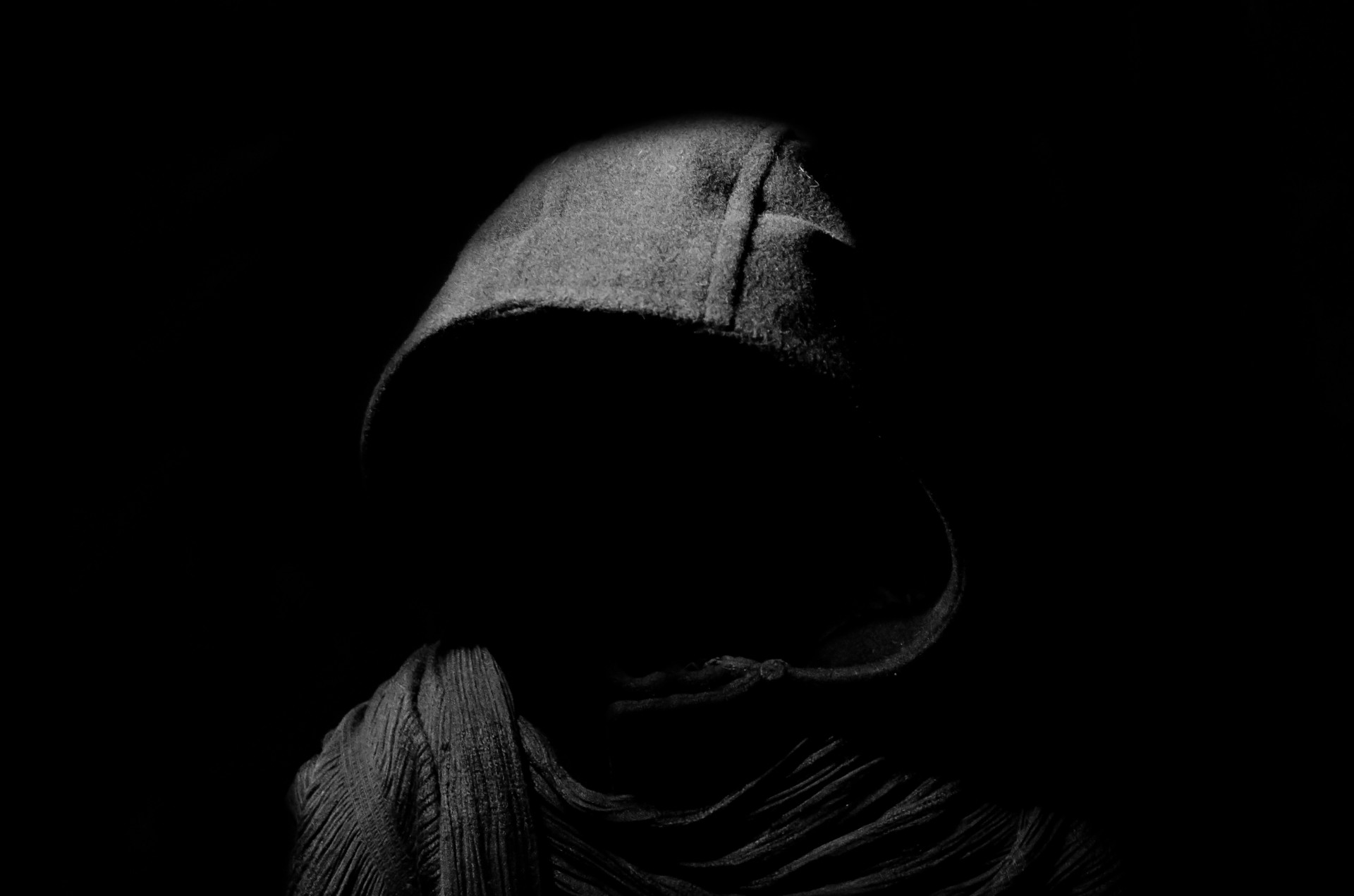 Imagine this scenario. After a long week at work, you are finally able to relax at home with your spouse and two teen-age daughters. You’re in your living room watching TV with your spouse. Your daughters are in their own rooms doing…whatever. Because both of you have worked hard for many years, you are now able to live more comfortably in what you thought to be a safe community.

At 9:00PM you hear a knock on the door and your spouse gets up to answer 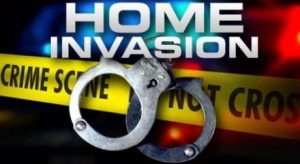 the door. After the door is unlocked you hear a sudden outburst as two strange young men burst through the door and into your living room. As the door crashes open, you see your spouse is being punched and beaten to the floor. Before you have time react you are overcome by physical force and threats of harm to you and your family. The two men are brandishing guns and are shouting obscene threats and commands simultaneously as they push you onto the couch. One of the men quickly searches the house for other occupants while the other stands guard over you.

Your mind is racing. Will we be killed? Will these attackers beat us or molest our daughters? The level of terror and anxiety is enormous and will cause victims to sometimes act irrationally. Some will freeze and become incapacitated from fright. Others will instinctively resist and try to fight back. Others will run away if possible. Psychologists have labeled this phenomenon as the “fight or flight syndrome.” The first thirty seconds are the most critical to your family’s survival.

What Would You Do?

Most people have never pondered this question for themselves or with their family. How will I react under similar circumstances? How will my family react independent of me? How will we react together? How you naturally react depends on many factors: your sex, age, physical condition, culture, personality, how you process information, how you react under extreme pressure, special training, skills, and past experience in responding to aggression. Most people don’t know for sure how they will respond to a personal crisis until it occurs. Many are surprised afterwards by their behavior as having been heroic, calm, cowardly, or stupid.

The response possibilities are endless, but most fall into three general response possibilities. You can resist the assault; comply with all commands; or you can try to stay calm, wait, and resist, comply, or flee as the scenario evolves. One thing is clear, there is no one single correct response to a life-threatening home invasion scenario. The choice is personal, based on your own assessment of your physical and mental capabilities and your belief as to the level of eminent danger.

Sometimes fighting and screaming works, especially if there are neighbors who will intervene or call the police. It makes no sense to risk fighting if you are physically incapable of doing so effectively. Total compliance sometimes works. The invaders might leave you unharmed and just leave. However, compliance may increase the duration of the invasion and therefore increase the potential for molestation. You need to thoughtfully consider how you or your family members might act under the circumstances and plan accordingly.

Having a family and neighborhood plan is essential. If you develop a home 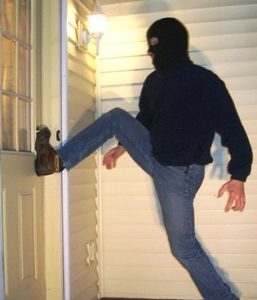 security plan and talk about it with your family and neighbors, the chances of acting appropriately and getting help are greatly improved.

Prevention works best. Harden your home or apartment with strong doors and locks and three-inch screws in the lock strike plate and door hinges. Use a wide-angle peephole and instruct everyone in your family not to open the door to strangers. Chain latches are ineffective as a barrier, so use your peephole to look outside before opening the door. Be suspicious of someone claiming to be making a delivery that you did not order or use other tricks to get you to open the door. Fortification of rear doors, sliding glass doors, and garage doors are also important. This gives you the necessary time to phone 911, sound audible alarms, or arm yourself.

Audible alarm sirens can prevent home invasion…if they are set. Alarm systems can be designed so that perimeter door and window sensors are activated while the home is occupied. The alarm can be set to instantly go off upon unauthorized entry. Be prepared to give a prearranged duress password to the alarm company if they call. Most alarm panels have an emergency panic button that will function much like a 911 call and will instruct your alarm monitoring company to call the police. Alarm company lawn and window signs help advertise that your house is wired and capable of getting a response from the police. These alarm signs and decals offer good deterrence value and may cause the robber to select another victim.

Automatic dial telephones, that can call 911 in speakerphone mode, can be effective in getting police assistance. If a home invader breaks in you may have just a split second to push the 911 direct-dial button on your telephone. If you dial in speakerphone mode the police dispatcher can listen in on what is going on in the room. Every telephone in your home should be programmed with this feature and all family members should be instructed how to make this emergency call. Your home address will automatically pop up on the police dispatcher screen and an officer should be dispatched even if the phone wire is cut. All 911 hang-up calls are supposed to be investigated by the police because of this type of scenario.

Have an Escape Plan

If someone in the household can escape and call for help, the home invaders will have lost their advantage of having privacy and time. To some, running away from your family in crisis is distasteful, especially to men or women with children. However, the alternative might mean being handcuffed or tied-up or otherwise incapacitated and left to watch in horror as your family is molested. If you have a plan for escaping, make sure you include where to run and what to say. Sometimes a radical escape measure pays off, in life and death circumstances, like diving through a plate glass window, jumping from a balcony or climbing onto the roof. Although you might sustain minor injuries you must weigh them against your chance of survival with the assailants.

Home invaders will sometimes threaten harm to children to get adults to comply with their demands. But at the same time, children are often overlooked as potential rescuers and sometimes are not as well guarded. If the opportunity presents itself, a trained child can dial 911, activate an alarm panic button, or escape to the neighbor’s house to summon the police. If they are capable, they should do it.

Keeping a cool head is important, even in dire circumstances. If you can keep your wits about you one can increase their options by waiting for the right moment to act. Always be thinking and re-evaluating the situation as it evolves. At first there may be no chance for escape, but after a while you may see an opening. Fighting may not be wise, however the attackers may let their guard down once you appear to comply. If you decide to strike a blow, do it fast, suddenly, and forceful to the nose, eyes, or throat without concern for the damage you might inflict. While the assailant is momentarily stunned, make your escape. Don’t stand there waiting to throw more punches or gather family members. You might ask, won’t that cause them to harm me for sure? Maybe, if they catch you. This is an option that must be considered. Sometimes hours into the siege, an opportunity arises where you can hit the automatic dial on the telephone or alarm panic button without being seen. Always be looking for that chance.

Screaming and shouting is the easiest and most natural thing that almost everyone can do. Screaming can alert savvy neighbors to call the police or the noise alone may scare off the home invaders. However, home invaders know this and will be prepared to make you stop screaming, by force, if necessary. One of the first threats you will hear is, “if you scream I’ll kill you.” If you can’t escape, but are out in public, scream your head off. Scream things like, “call 911.” Visit with your neighbors so they know that you have a family plan and teach them how to react when you need help.

Handguns and pepper spray can provide a means of self-defense in a life-threatening situation. Homeowners have successfully defended their families in the past from home invaders using such weapons. However, sometimes homeowners have lost their weapons to home invaders because they couldn’t get to them in time to use them. Most chemical sprays are tucked away somewhere and many handguns are kept unloaded or locked up to prevent children from getting their hands on them. During a home invasion, you cannot always count on your ability to get to these weapons before being injured yourself. Ordinary household products can work in self defense. Chemical fire extinguishers work great to disorient the robber.

Fighting with the intruders sometimes works, especially if you have some training and are physically fit. But for most, fighting doesn’t work because the victim was pre-selected for their lack of fight capability. In a life-threatening situation there are no rules for fighting in self defense. The idea is not to stand toe-to-toe and duke it out. All you need is one incapacitating blow to the nose, eyes, or throat to allow time to get out of there and call for help. Take a self-defense class together with your family so all can learn the proper techniques and can practice the procedures. A practiced technique has a better chance of being used effectively in a crisis.

Faking illness doesn’t always work especially in the home. Most home invaders don’t care about your welfare anyway. Faking illness might work in public or while being transported or while fighting off molesters, but don’t count on it as you only choice. You must decide in advance which technique to use depending on your acting skills.

What Not to Do

Don’t ever try to pull a weapon on an armed perpetrator who has you covered with a handgun unless you feel it’s your last chance. Don’t ever agree to be transported somewhere else like to an ATM machine or other location unless you feel it’s a life or death decision. The second crime scene is almost always more violent than in your home. If you have a choice, never agree to be tied-up, handcuffed or be placed in the trunk of a car because it takes away most of your self defense options. Don’t ever follow an intruder once they leave your home. Leave that for the police. Don’t fight over property loss, it can be replaced…your life cannot.